After lots of work, it’s finally gone live. Please click on the image below for details: 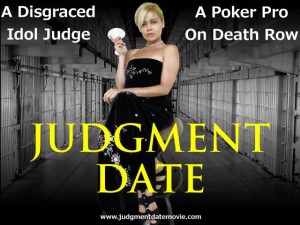 There’s a comprehensive plan of action there, so it’s a bit like an online business plan.

Please share it with your social network, and if you can, Donate a Dollar to Make a Movie.

My short script Casting Couch has recently been filmed, and is now in post. It’s not going to set the world on fire, but it’s an amusing little riff on a common cliché within Hollywood.

A Tale of three Trailers

After getting some interesting feedback for the trailer I wrote for Judgement Date, I’ve now written three, each in a different style:

They’re all 3 pages long, and will take under 5 minutes each to read.

Which one/s appeal to you, and why? Do let me know!

The Script of the Trailer … of the Film … of the Screenplay

I’ve just written a 3 page trailer script for my feature film screenplay Talent Show Takedown. People are busy these days, and don’t want to read 2 hour screenplays by writers they’ve never (yet) heard of. So how to interest them?

People like video. It’s easy, you just sit back and watch.

By filming this trailer, I’m hoping to drum up interest. If some bite, I might be able to get them to attach to the project. That all improves the chances of getting this produced.

If not, it’s been a good exercise by itself, and I’m sure I’ll both learn from it and enjoy it!

The trailer script is here if you’d like to spend 5 minutes reading it:

Please do let me know what you think. Any and all feedback is most welcome, including 7 figure bidding wars …

Hey, I can dream!

Posted in script, trailer | Tagged develop, feature film, judgment date, screenplay, script, Trailer | Comments Off on The Script of the Trailer … of the Film … of the Screenplay

No, really, I mean it! I was contacted by somebody online offering to invest in Australian business. Having little interest in the field, I suggested he invest in film. He seemed open to that, so I suggested investing in MY feature film.

I wasn’t planning on making one at the time, but after trying to get my feature film script Judgement Date read by decision makers in Hollywood, I hadn’t got much interest. So why not make it myself, especially as an investor seemed interested?

We went back and forth a few times, and then came the kicker: he wanted $3k for fees of various kinds. I don’t know for sure, but that sounds dodgy to me. I told him I didn’t have it (true), and I’ve not heard from him since. What a disappointment.

Or was it? I had another quick look at the story I’d written, and was surprised to find out that I still think it’s a great tale to tell. As I’d explicitly written it for a low budget, I started wondering if I could produce it myself.

I figure I could probably make it for $20k if I underpay cast and crew, on a deferred payment basis. Although not ideal, that kind of money could be raised via crowdfunding. So ever since I’ve been reading up on the topic, and am quietly confident.

There’s a huge amount of best practice to learn, and of course, no guarantees that it would all come together, but hey, that’s film making!

The research continues, as do preliminary steps sounding out various collaborators.

As the cliche goes: watch this space …

Posted in films, script, technology | Comments Off on Thank you Scammers

An aspiring actress in LA has been looking around for material, and she enjoyed my throw away 6 page comedy short Casting Couch:

An attractive actor auditions for a pretty casting agent. We’ve all read this script … or have we?

The sale proceeds won’t allow me to retire just yet, but it’s always nice to get some positive feedback.

Now, let’s see if I can sell this feature film screenplay …

Which Way from Here?

My local screenwriting group didn’t really take off, so I’ve let it lapse. Never mind, it was an experiment. They don’t all come off.

My next question is where to focus my energies. I love feature films, and have learned heaps writing my first script. But they take many months, and Hollywood isn’t usually interested in newbies unless they can package their screenplays.

On the other hand, I could start writing for a web series whenever I want to, and produce it with a small group of cast & crew. I could upload it and be online immediately. The size of my audience will tell me if I’m successful or not.

Yet I’m also very drawn to comedy. My short Simpsons Treehouse of Horror script was well received, so I’m tempted to just write one short comedy sketch after another, learning along the way, til I have a small batch of work to share.

As they’d only be a few pages each, I’d be able to write far more than I could by focusing on feature scripts, and learn more quickly as well. And as Tim Ferguson says that good comedy writers are in higher demand, it could be lucrative.

Assuming I can consistently write good comedy, of course!

I’ve recently created a new local group for writers to meet every month. While the focus is to learn by reviewing each other’s work, we’ll also review other screenplays, share resources, and encourage each other on the journey.

For more information, and/or to join us, please visit the meetup website.

The Academy says Thanks but No Thanks

I sent Judgement Date off to the Nicholl this year, who graciously thanked me but said I’d not progressed to the quarter finals. It’s a disappointment, but I shouldn’t expect to set the world on fire with my first screenplay.

They said I was in the top 15% of entries, which is a consolation. Unless they say that to everybody who enters. No, they wouldn’t do that … would they?

Posted in films, script | Tagged competition, feature film, judgment date, screenplay, script, story | Comments Off on The Academy says Thanks but No Thanks

Even though writing this screenplay has been a huge wonderful challenge, marketing it is perhaps an even bigger challenge! Hollywood is constantly innundated by screenplays, most of them dreadful, so getting read can be a massive challenge.

I’ve been trying new ideas. e.g. I’ve listed on Inktip, which attracts many prodcos from Hollywood and elsewhere. I’ve also sent it off to a few competitions, such as the Nicholl. I don’t expect to win, but it does get me read by people in the biz. That can only help.

If they like what they read, great! That’s a good start. If, after half a dozen screenplays, nobody likes any of them, maybe I’ll get the message! Til then, I’m giving it my best shot …